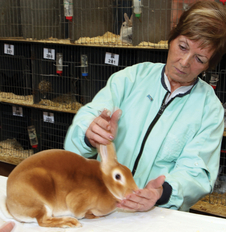 In 1968 the following article was published in Fur & Feather which explained the origin of the Orange and Fawn Rex and the club’s history. It was written by Mrs Pat Gaskin who at that time was the Secretary of the National Orange & Fawn Rex Rabbit Association.  Pat has made a few amendments to bring it up to date.

THE BLOSSOMING of the Orange has all the flavour of a rags-to-riches fairy tale – at first a Cinderella variety struggling for recognition, then the long hard climb to reach success, climaxed in 1968 with the presentation of the rabbit that is nearer to perfection of the rabbit that it has ever been, proudly guided by the biggest rex club in the UK – the National Orange & Fawn Rex Rabbit Association. It is a story that has taken thirty years in the telling.

From its introduction in 1924 of the first rex – the Castor – many other types were rapidly evolved. The first Orange Rex were produced in 1933 by rexing the New Zealand Red. They had poor coats and were more like Belgian Hares than today’s typey exhibits. Not surprisingly the breed did not catch on and the Standard was withdrawn.

In the late nineteen thirties a geneticist called Roy Robinson began re-creating Orange Rex from the Castor. This time they were interbred with Havana Rex and pale Cinnamons. The result was Castors, Cinnamon, Black, Black and Tans and Chocolate and Tans – but a fair proportion were Orange.

A well known judge George F Baker who lived in Middlesex was among the first to take up the new variety, obtaining stock from Roy Robinson in 1940. George recalls that his first Orange pair were promising for colour but the doe’s feet were so sore that she had to be encased in bandages.

But in spite of many setbacks this dazzling new colour prospered. Its popularity was proved by an entry of twenty two at the adult stock show of the Southern Rex Club in 1942.

The following year Mr Baker was asked to draw up a standard. The description of the colouring was as follows:

“Saddle to be a deep brilliant orange, extending from nape to tail, colour gradually shading down the flanks to extend as far down the fur as possible, clearly on a cream or white undercolour.”

Later the standard was altered and the word “brilliant” altered to “rich”; cream bellies and undercolour were also banned.

In 1943 breeders were also taking an interest in another attractive “outcast” as a result of Orange matings. This rabbit had similar markings to the orange but was fawn coloured and the coat was exquisitely dense. The pretty Bambi stranger was given recognition and became known as the Fawn Rex, although it never achieved the popularity of the Orange. The first standard called for a “medium warm fawn” but was later changed to become a “bright golden fawn”.

George Baker considered his early Orange to be “quite useful” but having handled the exhibits of Miss Morris of Oxford on the judging table he decided to pay her a visit. Miss Morris was then the country’s leading exhibitor and many of today’s Orange can be traced back to her champion buck “Ginger Griffon”. Miss Morris had obtained her first doe from Danecourt Stud (who had achieved success with Orange at the National Championship Show in 1946) and mated it to a Castor-bred buck. The combination clicked.

The quality of Miss Morris’ stock so impressed George that he persuaded her to part with a wonderful buck. He used him on all his does and never looked back. One doe bred out of this buck produced a litter of six and all were in the cards at the club’s young stock show, including best in show.

By 1948 the newly formed National Orange Rex Rabbit Club had fifty-one members and £15 in the bank. Its President was the late Thomas Leaver and its chairman Captain Southall. Praise is given in its first yearbook to its energetic young secretary – “Here we have a young man burning with enthusiasm for the club, who in the future will be one of the shining lights in the Fancy”. The man was C Telford Britton.

Then Miss Morris was asked to take over the National club and under her reigns the two colours continued to make progress. One of the club’s most distinguished members was Lady Olivier (the actress Vivian Lee) who bred and exhibited Orange Rex from her home at  Notley Abbey.

In the early fifties the club was taken over pro tem by its Vice President George Baker but during  that decade went through a critical period. The “National” had split into two clubs, one catering for the Orange and the other for the Orange and Fawn. Both clubs were efficiently run and Orange Rex breeders were able to enjoy double the amount of stock shows, but it nearly finished the Fawn Rex.

Throughout this period many bitter things were written and said. There were strenuous efforts, both in Fur & Feather and behind the scenes to amalgamate the two clubs. One well known rex fancier E J (Jock) Hardwicke wrote many letters for the fancy press and later told me that it was one of the happiest days of his life when the two clubs finally agreed to join forces in 1961.

The club flourished and celebrated its fiftieth “golden” anniversary in 2012. Of the original committee Joe Phillips (elected a life member) and Eddie Hutchings (current President) are still supporting the club and its two lovely colours, the Standards recently being joined by the popuiar Minis.